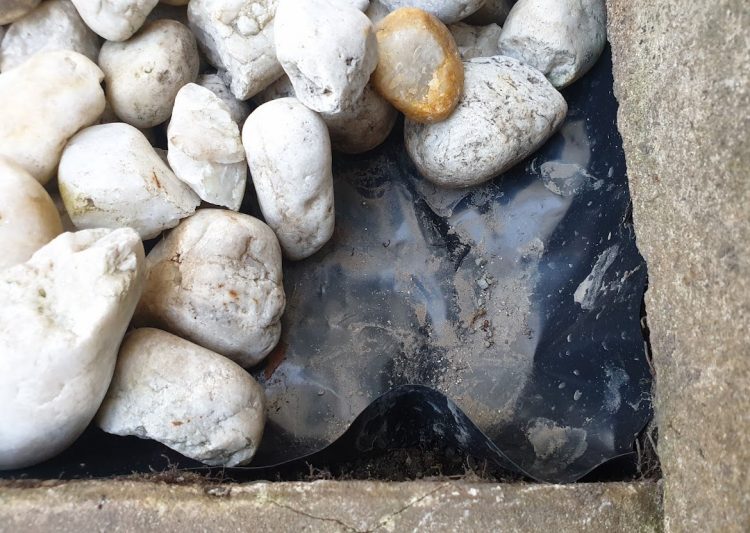 It is extremely important to keep your rock landscaping looking its best.

To do that, you’ll need to know how to get rid of weeds in rock landscaping effectively. It may seem like a daunting task at first glance, but there are many ways for you to take care of this problem quickly and easily.

This blog post will show you the steps for getting rid of weeds in your rock landscape and keeping it weed free from now on.

So let’s dive right into it!…

Weeds can be a major nuisance in any landscape, but they can be especially troublesome in rock landscaping. Some of the most common weeds in rock landscapes are crabgrass, dandelions, and clover. These weeds can be difficult to eradicate, so it is important to start treatment early.

For a variety of reasons, rock landscaping within any garden may be absolutely stunning. The first is that there will always be a wide range of hues and tints, and the second is that each rock is distinctive, adding to its overall splendor and appeal.

If you haven’t yet given rocks a try as part of your landscaping design, make it a top priority..

Another advantage of incorporating stones into your landscaping design is that they generally require little attention. However, there is one maintenance activity that must be performed, and it’s removing weeds from around the rocks.

If you keep reading, we’ll go through some of the best methods for eradicating weeds and how to keep them from returning in your rock landscaping.

Tips to Get Rid of Weeds in Rock Gardens

Like most things in landscape design, it is important to know your enemy. Once you understand the weeds and what they look like, it is easier to prevent them from ruining your rock garden.

The most common types of weeds in a rock garden are crabgrass, dandelions, and clover. Crabgrass has sharp blades that grow in groups at the base of the grass plant.

Dandelions have a milky white juice when the stem is broken. And clover has leaves that are divided into three parts, similar to a triforce from The Legend of Zelda.

Identify The Type Of Weed In Rock Landscaping

I would choose for this type of garden plants with deep roots and plants which do not need much water. I would avoid small plants which can not stand drought, because they are very sensitive against any weed.

If you are not sure which type of weed you have, bring a sample with you when trying to identify it at a garden center. They should be able to help you identify the weed and suggest a treatment for it.

In many cases, the weeds will either need to be sprayed or dug out with a shovel. If you decide to spray them yourself, make sure that you use a pesticide specifically designed for that particular type of weed.

The weed in rock landscaping can cause major problems, since it will spread quickly and take over the entire area. Some types of weeds actually feed on areas near rocks because they are not getting adequate nutrients. Many weed killers do not work well for this type of application, so be prepared to dig out the roots completely if you use spray weed killer near your rocks.

Weed killers, such as Roundup and RangerPro™, are one of the most efficient approaches to remove weeds from your rock landscaping. Bermuda grass, ragweed, and crabgrass are among the most common weeds that may be removed with this method.

While a chemical weed killer can be ingested or sprayed as a liquid from a bottle, we urge

Granular weed killers are undesirable since they may spread beyond the targeted area and damage plants that it was not intended to.

You can use one of those plastic bottles with a trigger to spray the liquid weed killer directly at the weeds you want to eliminate and hopefully avoid any unintended damage to surrounding plants or flowers by using it.

Given that a liquid weed killer is a chemical, you should follow certain safety precautions before, during, and after application.

The first shouldn’t be necessary but it will be mentioned, and that is to always read the instructions supplied with the weed killer. This includes determining whether or not it may be utilized as it comes or if it must be diluted because

If you have plants beside your cactus, keep in mind that you don’t want to spray them. When attempting to eliminate weeds while there is a strong wind blowing, this is especially true.

Chemical weed killers may harm other plants, including grass, so be careful with your aim.

When using weed killer, you must take care of your own safety first and foremost. As a result, items like gloves and safety glasses should be utilized at all times.

It’s also critical that the clothing you wear covers your arms and legs in order to avoid skin exposure if anything spills. Appropriate shoes must also be worn so that sandals or

One of the best ways to deal with weeds in a rock garden is to use a herbicide. There are many different brands of herbicide available, so it is important to choose one that is specifically designed for weed control in rock gardens. Be sure to read the label carefully to make sure that the herbicide is safe for use around rocks.

Weeds can be a nuisance in any garden, but they can be especially troublesome in a rock landscape garden. One way to deal with weeds in a rock garden is to use a herbicide. Be sure to read the instructions carefully and follow all safety precautions.

This method should be used only if the weeds are very persistent and will not go away with other methods of weed control.

To use a herbicide, during an autumn or early spring suspension, spray the whole plant with the appropriate herbicide for your landscape.

Treat all exposed areas thoroughly and wait at least three weeks before walking on it (to avoid contaminating your feet). If the herbicide remains effective, you may not need to spray again.

However, if necessary, repeat the process in late spring or early summer. Herbicides are strong chemicals that can cause serious damage if handled improperly or applied incorrectly.

Never apply an herbicide on a windy day, because it could drift to other plants that are not meant to be treated.

Avoid spraying herbicide on drought-stressed plants, because this could make the problem worse. Also avoid using an herbicide in direct sunlight, because it can cause excessive damage.

Another option for dealing with weeds in a rock garden is to hand-pull them. This is a time-consuming option though, and it does not always work.

For those of you who don’t mind putting in a little effort and getting your hands a little dirty, or if you don’t like the idea of using chemical weed killer on your rock landscaping.

First, you’ll need gloves since they not only keep your hands clean but also, and more importantly, to avoid blisters if you have a lot of weeds to pull. You should also wear safety goggles just in case soil flies out as you pull any weeds, causing your eyes to get dirtied.

Knee pads are suggested because you will most likely be kneeling while pulling weeds from low down, although if none are available an old cushion or a rolled-up towel will suffice.

The first stage may appear to be the polar opposite of what you should do, but it’s important to water the weeds. This isn’t meant to cause them to grow; instead, it is intended to loosen their root system. Because you don’t merely want to get rid of the weeds, but also the roots from which they spring, you must

If your plants need watering, wait a few days before proceeding to the following step, which is to use a tiny garden fork or similar to loosen the earth surrounding the weeds you want removed.

The more effectively you loosen the soil around the weeds, the more likely you are of removing even the most tenacious of plants.

You should then grab each weed individually rather than pulling a group of them since this increases your chances of removing the roots.

Grasp the weed as near to its base as possible and pull upward in a twisting motion. Remember, all of the roots need to be removed also. If any of the roots are left in the ground, the weed will grow back.

Some types of weeds need to be cut out, since the roots run horizontally along or under rocks. When removing weeds in rock landscaping, it’s important to get all of the root systems so that nothing will grow back.

One of the most effective ways for dealing with weeds in a rock garden is prevention. One way to do this is to use mulch to prevent weed seeds from getting into the soil.

You can also keep your weeds at bay by making sure that the rock garden is kept moist. There should be enough water so it looks like a full cup, but not enough so there are puddles present after you water.

Maintaining a rock garden can be a bit of a challenge since the rocks can be difficult to work with and there is little soil for plants to grow in. One way to prevent new weeds from growing in your rock garden is to spread mulch over the area.

Mulch will help to keep the soil moist and will also block out light, preventing new weed seeds from germinating. Be sure to use a type of mulch that will not decompose over time, such as wood chips or bark, so that it will continue to provide weed control.

You should periodically rake the mulch away from your plants to make sure they have enough space to grow. You can also put a layer of gravel over the mulch, but take care not to lay it too deep – otherwise, you’ll end up with an area that remains very moist and could cause problems for some plants.

The best season to spread mulch is during the early autumn, after all of your plants have finished blooming for the year.

If you are looking for some decorative ways to use mulch in the garden, consider building a small pond or filling planters with it. Mulch can also be an attractive addition on top of pathways and around trees.

Pour boiling water over the rocks that have weeds to kill them. The excessive heat of pouring rock salt around the weeds will cause them to wilt, which will certainly speed their demise.

Spraying vinegar on the weeds can also cause them to die since it is so acidic. You must be careful not to harm any other plants in the vicinity as they may all harm these plants.

Other than removing a few weeds from rock landscaping, it’s probably the most low-maintenance aspect of your garden. It can also improve the look of your yard.

Hopefully, you’ll agree that aside from removing a few weeds from rock landscaping, it’s a really low-maintenance feature that may be used to enhance the appearance of you rock garden.

Landscape Fabric for Flower Gardens: A Must-Have Tool in Your Landscaping Arsenal

Best Backyard Landscaping Ideas for a Beautiful Garden All Year Round